Pattern
A pattern is defined as a repeated arrangement or set of numbers, shapes, colours, and so on.

The pattern is square, triangle, and circle. These three shapes are repeated continuously.

Therefore, the missing shape is a circle.

The missing shape is a cone.

Some patterns can be made by turning the shapes in different ways.

We can turn the shapes in two ways:

Clockwise is defined as the direction when something turns in the same direction as the hands in a clock move.


Anti-clockwise is defined as the direction when something turns in the opposite direction to the hands in a clock.

The arrow has been moved each time in an anticlockwise direction.


Steps to find the rule in a pattern-

1. Observe the first shape and then compare it with the second shape.

How to find the missing shape in a pattern?

Let’s learn with an example:

2. Compare with the second shape

3. In this, the triangle is turning a quarter-turn in the clockwise direction.

4. Turn the figure C quarter-turn in the clockwise direction to get the figure D. 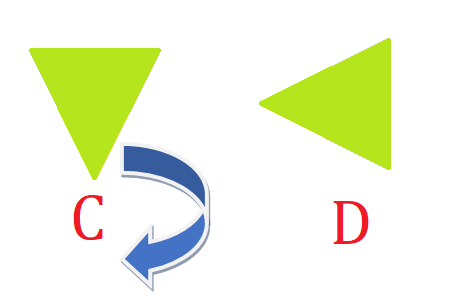 The given shapes are moving in a clockwise direction.